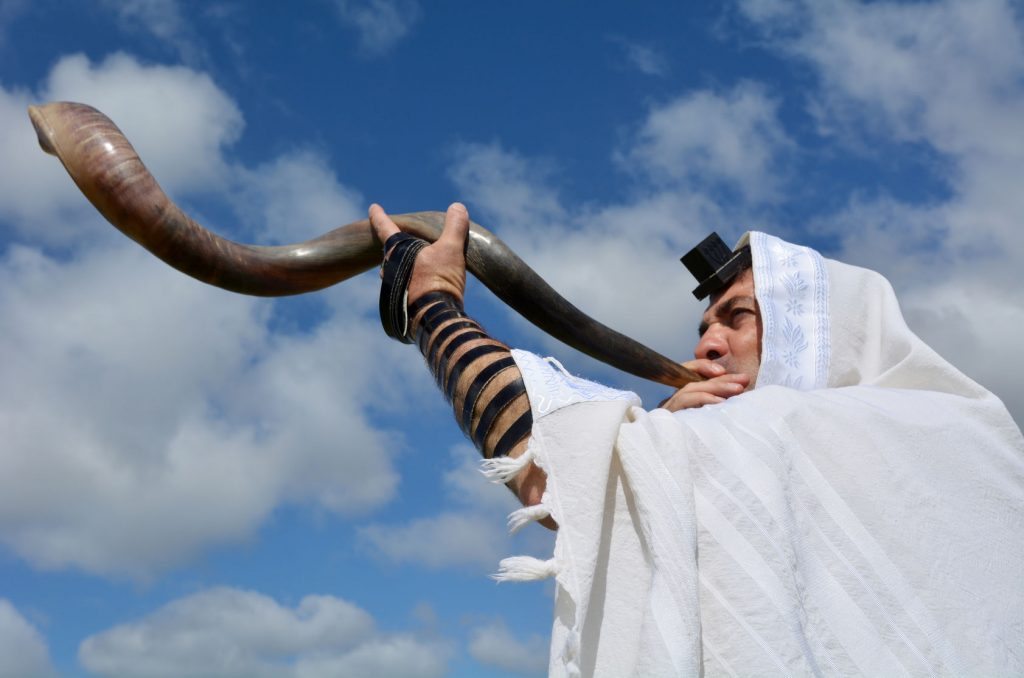 When my daughter was two, she was terrified of the shofar.

If only that playgroup teacher hadn’t been so dramatic about how “the shofar makes a very loud noise!”

No amount of reassurances, explanations, or comparisons with familiar noises would convince my daughter that it was worth accompanying me to shofar blowing on Rosh Hashanah.

For kids with sensory issues – and their parents – the High Holidays brings with it a host of challenges.

Or the honey is too sticky and it makes everything sticky and your child refuses to come eat anything until he (and the entire table) are hosed down and dried up.

Or the synagogue’s A/C is on a little high and your child spends the entire service whimpering about how she’s freezing, and jumping up and down “to keep warm.”

Or you are guests at a holiday meal and your child shoves the soup away and calls it “disgusting” right in front of the hostess.

But before we sink into the mire of dread or bog of resentment, let’s take a break and listen to the shofar.

The traditional Jewish sources say that the shofar is supposed to be a wake-up call. It’s supposed to shake us out of our rote actions, our routine perspectives, our habitual way of looking at the world.

We think about our children so often. Yet for all the opportunities, we usually find ourselves riding the same train of thought over and over and over again.

When our children have issues, especially ones that cause us embarrassment or pain, that train of thought tends to chug down the negative track.

As a therapist who works with children with sensory integration issues every day (and the mother of one myself), I’d like to blow the shofar for you. I’m not minimizing how challenging life can be with your child, but I would like to enable you to break out of your standard pattern, and take a different train of thought for a spin.

Remember what it was like to be pregnant with your child? No, I’m not trying to evoke emotional, mushy memories. I’m trying to bring back that feeling you had when your spouse brought you your favorite take-out. You reached for it eagerly, took one whiff of it, and… well, let’s just say your stomach promptly exhibited you some “mushy” stuff and it wasn’t all that pleasant. (Apologies if you’re reading this over breakfast.)

For many of us when we’re pregnant (especially during that beloved first trimester), our senses go into a state of hyperarousal. Smells and tastes we loved before are magnified one hundred fold, and that can make them downright nauseating.

I recall going to the grocery to pick up milk during my first pregnancy. Upon coming within 5 feet of the refrigerated shelves, teeth chattering and shivering would immediately commence. This didn’t happen just once. For three months, my sense of temperature was totally out-of-sync with what the rest of the population was experiencing.

Children with sensory integration issues get to experience out-of-sync reactions all the time, and they don’t disappear after three months. Your child who practically threw his bowl of soup off his plate and called it disgusting? Think about how you reacted to your favorite takeout – and you’re a mature adult.

In a word, many children with sensory issues are “hyper-vigilant.” They are super-attuned to stimuli and super-sensitive to what’s going on around them.

If that capacity isn’t regulated, it’s overwhelming. You know that feeling when every single one of your kids is demanding your immediate attention? That’s how your child perceives physical stimuli that seem like “no big deal” to you.

The child who refuses to look you in the eyes? When you look at her eyes, you see eyes. No big deal.

When she looks at your eyes, she notices all the different shades of color in your iris. And the reflection of light off your pupil. And she notices every move she makes reflected in your eye.

I’d likely be overwhelmed and try to avert my eyes as soon as possible, especially if I was supposed to be concentrating on something, like what my parent was saying.

The child who freaks out whenever you try to take a family picture in a portrait studio? You’re sitting in the studio looking at a guy with a camera for five minutes. No big deal.

Your child, on the other hand, has a new sweater rubbing against his skin with the harshness of sandpaper. His brother and sister are sitting on either side of him, but he feels as crowded as if they were sitting in his lap. Lights the strength of stage spotlights are glaring in his eyes. He’s attuned to the pheromones and cortisol flowing through his mother’s bloodstream as she silently stresses that this portrait come out right. (Yes, hyper-vigilant kids can physiologically pick up on that.)

I’d be hard pressed not to run screaming out of the place where I was going through all that.

If this shofar blast helps you off the track of resentment and frustration and onto the track of empathy and understanding – even for a short ride – you’ll have done a tremendous thing for yourself, your child and your relationship.

Let’s blow the shofar one more time, however, and see if we can wake up even more. Let’s catch a ride on the perspective of appreciation and gratitude.

Without the ability to regulate the intense stream of stimuli coming at them, hyper-vigilant kids are overwhelmed and often out of control. Navigating the sensory storm takes every ounce of strength they have.

As I’ve seen time and time again in therapy, however, once these children gain the tools and skills to regulate themselves, their sensitivity becomes an amazing asset.

The child who sensed whenever you were stressed and freaked out? He’ll still sense your stress. But now it will manifest as empathy, intuition and emotional depth, usually beyond the abilities of your “non-sensory” children. “Mommy, you look upset. What’s wrong?”

The child who couldn’t take it if a toy, book or shoe was moved an inch out of “its place”? Her attention to detail and organizational ability will come in handy once it’s regulated.

The child who couldn’t concentrate with any level of background noise and jumped out of his skin whenever the doorbell rang? His sensitivity to sound, tone and the hidden meaning behind what his conversation partner is saying will be a tremendous asset, especially in his future relationships with his spouse, children… and you.

These are just examples. Every child is individual. But I’ve worked with enough individuals to see that every child with sensory challenges can uncover assets and launchpads where there were once obstacles and potholes.

Go ahead. Take a deep breath. Blow the shofar. Good and loud.

Stay Updated
with Hands on OT

Thank you for subscribing.

We respect your privacy and take protecting it seriously